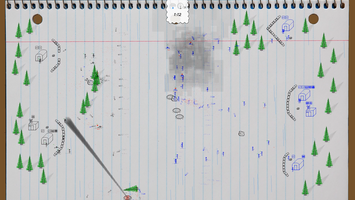 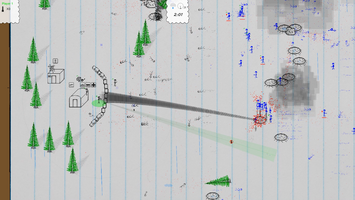 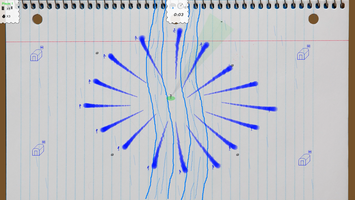 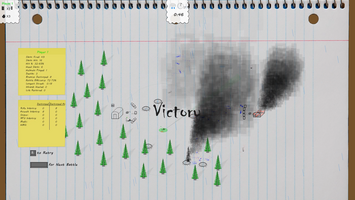 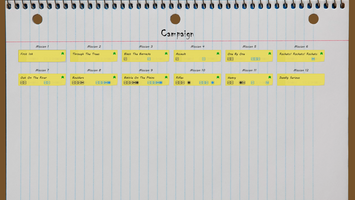 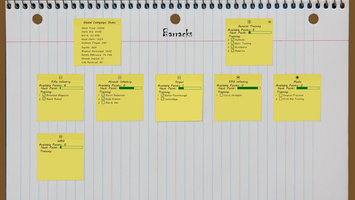 Today  marks the release of the alpha 4.0 version of There Will Be Ink (TWBI), a tactical action game currently under development by me, Brodie. TWBI will be my first official release. The goal with this game is to take a simple concept, in this case bringing to life the stick-folk battles my friends and brothers and I drew as kids, and to run through the full process of developing that idea into a finished game. Although the concept behind TWBI is simple and, sure, kind of silly, I’ve aimed to implement enough game mechanics and features to give the game a little more depth than the concept might suggest. This new version of TWBI is also the first public release of the game. It can be downloaded right here on itch.io:

The game is free to download, but donations of $4 (USD) or more will grant access to all future builds as well as a Steam key for the final game. My hope with this early release is to get some constructive feedback, as my testing audience so far has been mostly myself and occasionally one or two friends. The final release of the game will be available on Steam, itch.io, and possibly other platforms. Now then, on to the new features and changes that have been added since Alpha 3.

One issue with Alpha 3 was that camera/view movement was fairly jerky. I’ve since smoothed out panning, zooming, gamepad controls, and how the scene constraints are handled, which makes the battle much easier to follow and to play, especially in multi-player.

Gamepad controls have been reworked, or more specifically reverted and improved, making the game much more gamepad-friendly. All menus can now be fully navigated with a gamepad, leaving the map editor as the only screen that requires a keyboard and mouse. I’ve also added a “smart-aim” feature for grenades. Now, when the player aims their grenade toss (hold LB), the aiming coordinates will default to any enemy building within range, followed by any enemy unit in range if no buildings were found, followed by the coordinates of the throw range in the direction of the player’s weapon (old system) if no buildings or units are within range. The player can still move the aiming cursor around as before, but I found that this new feature brings grenade aiming and throwing with the gamepad up to bar with keyboard & mouse controls. There is now a “precise aiming” mode that is enabled when holding down (like a button) the right-analog stick to make fine adjustments to aiming, which is especially effective for snipers. I’ve also added a “range zoom” function for the RPG Unit. To use this, hold down the right-analog stick and use LT/RT to adjust the range of the RPG. This isn’t as quick as aiming with the mouse, but it makes it possible to aim at targets that are closer than the full range of the RPG.

There Will Be Options

An ‘Options’ page has been added to the main menu, allowing the player to toggle such things as red ink (ie blood) levels, screen shake, music, persistent battlefield (whether leftover shells, blood, dead soldiers, etc stay or fade away), as well as the game mode (see below).

I have a tendency to add simulation-like mechanics to games because I find them interesting, but sometimes those features can take away from the fun, and I’m not sure whether some of these features fit with the theme of the game. Examples of such mechanics are weather effects (eg wind affecting bullet trajectory), unit exhaustion (when units run out of stamina), movement aim penalty (unit aim being reduced while a unit is moving), recoil aim penalty, leg wounds affecting movement speed, and so on. In this new version, the player can simply toggle between “Arcade” and “Sim” mode from the options menu. At present, campaign and unit unlock progress will only be saved in sim mode until I sort out which mechanics should be kept or alternately whether sim mode should be a sort of game+ mode that is unlocked once the campaign is completed in arcade mode (or vice versa).

The physics for blood spatter and unit deaths was initially thrown together pretty quickly, and while it worked alright, objects didn’t quite behave how I wanted them to. I’ve since revamped those physics, perhaps overcompensating and making them a little tooover the top in some cases (get behind the sniper rifle or HMG to see what I mean). Further tweaking will likely be needed. Corpse objects now cast shadows as well, as do non-fallen trees.

I had a chance to do some playtesting with a friend as well as solo and I’ve balanced out some of the maps by adding/removing cover, units, and buildings, adjusting unit spawns, etc. I’ve also added two new campaign levels, one called “Out On The River”, between missions 6 & 7, and a new final mission called “Deadly Serious”, bringing the total up to 12.

Although the game is designed for each unit to have a short lifespan in a battle, I felt it would be worth rewarding players who have a good streak going. To address this, I’ve added a new class of abilities that rewards individual units based on player performance, like such:

These abilities are pricey (5pts) and likely need balancing. I plan to add more abilities of this sort to grant advantages such as health regeneration, stamina & movement speed boosts, and so on.

Although some new content was added, the focus for Alpha 4 was largely about playability and improving what was already there. I will likely retain some of that focus for the next release, but I’d also like to add some more content (units, abilities, levels, music, sounds, graphics, etc). I’m hoping to get some constructive feedback with this release, so that could dictate my focus as well.

One thing I’ve found is that some battles can be a bit of a grind. The new “high tech” abilities should help address this, but I’d also like to add a little more strategy to battles. I’m not entirely sure yet how I will go about this, but I have a few ideas to try out.

My initial plan with TWBI was to leave out any kind of story and leave that aspect up to the imagination of the player, you know, like how you used to do when you were drawing out these battles as a kid. I’m still leaning in the direction of keeping the theme somewhat open, but one thing the game could use more of is personality. One way to add more personality is to add a bit of story, but I might instead (or also) achieve that goal by fleshing out the graphics and sound some more and by adding more unit types and abilities. Whichever way I decide to go about it, there is a pretty good chance that T-Rexes with jetpacks will eventually make their way into the game.